In recent years, the world of rare coin price guides has changed dramatically. When I began my career as a rare coin dealer in the 1970s, the Guide Book of United States Coins (the “Red Book”) was the primary source of rare coin prices. The annual book would usually come out in early summer, and for a few months before publication, rare coin dealers would wait eagerly to price their coins.

Most years, the price changes were moderate – sometimes intentionally, so as not to disrupt the market. When huge hoards came out–such as the US Government’s sale of silver dollars in the 1960s–prices could change significantly.

Another interesting fact about early coin pricing is the lack of information available to the editors of price guides. There were no grading company population reports to give an indication of true rarity. The annual price guides of the 1970s and ’80s listed prices for hundreds of coins that did not exist. There has never been an example of an 1870-CC Double Eagle known in mint condition. The 1973 Red Book lists the price for one at $12,500 in Uncirculated. The prices for extremely rare coins that did not exist were theoretical. Price guides now rarely list a price for a coin unless one has been graded by third-party grading companies. For most of my career, rare coin prices have been determined by using some combination of price guides. This includes retail and wholesale price guides. When buying or selling a coin, the secret was to have the knowledge about an issue to know what percentage of these price guides one could expect to get for a coin. Some series are more popular than others, and some coins were much rarer than any price guide recognized. Most of this knowledge had to be learned firsthand by buying or selling. For collectors and dealers, knowledge was power.

Today, most collectors and dealers take this information for granted. It is easily accessible and comprehensive. Surprisingly, this same information was nearly unavailable about 20 to 25 years ago. In the early 1990s, John Dannreuther and I created one of the first databases for auction prices realized. We were both doing research for numismatic books and thought the information would be very useful. We hired college students to take the latest auction catalogs and enter the prices realized into an Excel database. Then, we worked our way back to include famous named sales as needed. The process was slow and arduous, but within six months, we had a very useful tool.

I soon realized how useful this new tool could be when buying rare coins. At a Michigan State Convention, someone offered me an 1841 Quarter Eagle. With my new tool, I was able to determine that when these rare coins sold, they always brought significantly more than price guides indicated. Shortly after, we hired more college students! The information was extremely valuable and an almost unfair advantage when buying rare coins. In the next 20 to 25 years, others saw the same value of this information and developed their own sophisticated software to capture the information. There was no more need for college students to enter prices by hand. 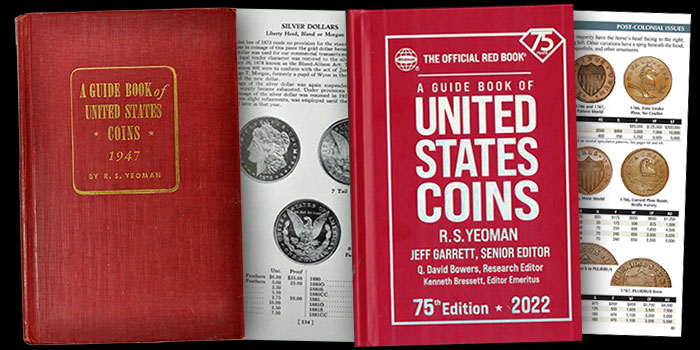 Collectors and dealers now use auction prices realized as an important tool when making a buying decision. The information is now used for coins at every price level and not just for major rarities. Many of the auction houses offer historical auction records as part of their lot information. I am now the Senior Editor of the Guide Book of United States Coins (the “Red Book”), and recent auction prices are an important ingredient when deciding retail prices.

The information is important, but not the only factor when determining accurate retail prices for rare coins. Information about auction prices realized can be extremely confusing; many coins of the same grade sell for wildly different prices. This can occur in the same year! One recent example: At the July 2021 Heritage Auctions sale, a 1907 High Relief Double Eagle graded NGC MS 66 realized $60,000. In a November 2021 auction, an NGC MS 66 sold for $87,000. A lot of factors come into play when examining auction prices realized.

Auction prices realized can also be very confusing when coins are sold that dealers or collectors think are very under-graded. Quite a few dealers make a living looking for these types of coins and are very aggressive in bidding on them. The prices realized can defy common sense. In October 2016, a 1903 Jefferson Gold Dollar graded NGC MS 66 sold for $3,760 versus a retail price guide listing of $1,500. Cases such as this are quite common, especially when an old-time collection is offered at auction. Interpreting the information of auction prices realized is sometimes more art than science.

Most serious collectors and dealers know that not all coins of the same grade look alike. They are more artworks than bland commodities. In other articles, I have noted that only about 25% of rare coins are attractive for the grade. Most have a dull or unattractive toning. That is why coins with great eye appeal sell for considerably more money. Rare coins with beautiful toning can sometimes sell for prices that defy logic. What a coin looks like really matters and should be taken into consideration when studying auction prices.

Another factor that plays an important role is the collector demand when a coin is being sold at auction. In recent years, the popularity of collecting coins for set registries has grown substantially. There are some series with a huge number of collectors chasing a few coins to increase their set ranking. This can sometimes lead to prices realized that seem illogical. There are some coins struck after 1964 that sell for prices usually reserved for true rarities. If two collectors butt heads, the price realized can be a one-time event. It takes at least two for an auction price to run away. I would never purchase a coin based on an auction price that might never again happen. Also, many of these prices are based on grading rarity alone, and prices could tumble if a higher-grade example is produced by the grading services.

Collecting by set registry can be extremely exciting, but I would suggest careful study when buying condition rarities.

On the other end of the spectrum are coins that sell for seemingly low prices for no reason. This can occur in any large sale where there are always coins that fall through the cracks. Not every coin in every sale has buyer support.

A low price realized can simply be a matter of just a few bottom feeders bidding on the lots. These bottom feeders will buy anything based on price. The prices do not represent what the coins would sell for to a willing buyer who needs the coins for their collection. As a matter of fact, real estate appraisers usually do not consider auction prices when making an appraisal. Those are considered distress sales and eliminated from the equation.

It should be remembered that rare coin prices are the result of supply and demand, and this applies to rare coin auctions. Occasionally, there is too much material offered for the market to absorb efficiently. This can lead to depressed prices at auction, at least until the material has been absorbed.

In the last few years, several massive collections were sold unreserved. Colonial coinage was particularly hard hit with excess material being sold to a relatively small pool of collectors. Prices dropped on many issues and now is a great time to add these to your collection. Just don’t expect to buy them at the absolute low auction price realized when dozens of great coins were being sold the same day. The same advice applies to nearly every series that was over-represented at auction in recent years.

Rare coin auction prices have become a very important tool, but the information must be used with intelligence. Make sure to take the information mentioned above into consideration and use all available tools when making a purchase decision.