The recently completed Stack’s Bowers sales featuring the first and last American Silver and Gold Eagles saw record prices for pedigreed modern coins sold at auction, stunning most observers. Touted as the Dusk to Dawn Anniversary issues, the coins were the last 500 Type 1 and first 500 Type 2 pieces, struck in the presence of then-Mint Director David Ryder and other Mint officials.

The obverse design for the gold issues was an adaptation of the Augustus Saint-Gaudens Double Eagle from 1907. The Type 1 features the reverse design by Miley (Busiek) Tucker Frost that had been in place since the coins were introduced in 1986. The Type 2 reverse design that debuted in 2021 was created by artist Jennie Norris.

With the spotlight shining on the American Silver and Gold Eagles, many collectors may wonder about the collectability of the gold issues. For a modest investment, you can complete a set of NGC-graded MS 69 Silver Eagles from 1986 to date. NGC-graded MS 70 coins are a much steeper challenge but can be done with ample funds and patience. Unfortunately, the same cannot be said for the American Gold Eagles.

The United States Mint began producing American Gold Eagles in 1986 in accordance with the Gold Bullion Coin Act of 1985. The coins range in size; they are produced in 1/10-ounce, 1/4-ounce, 1/2-ounce, and 1-ounce gold increments. Each coin is guaranteed by the United States to contain the stated amount of gold and is required to contain gold sourced in America.

As mentioned above, the obverse features a modern rendition of the Augustus Saint-Gaudens Double Eagle design first used in 1907. Coins struck from 1986 to 1991 are dated with Roman numerals. In 1992, the Mint switched to Arabic numerals. The reverse design, by Miley (Busiek) Tucker Frost, features a male eagle carrying an olive branch above a nest with a female eagle and hatchlings. These bullion coins are legal tender and carry face values of $5, $10, $25 and $50. Recently produced coins usually sell for some small premium to their bullion value.

The Gold Eagles are also much harder to find in superb condition. Many of the early issue Uncirculated coins were sold simply for bullion without special care or preservation. Gold is extremely soft, and the coins were usually shipped in rolls. Even minimal contact with other examples precludes the vast majority of the coins from grading MS 70. Additionally, a complete set of American Gold Eagles in both striking formats contains well over 100 ounces of gold, demanding a multi-six figure investment regardless of grade. The challenge to collecting the series is truly immense. 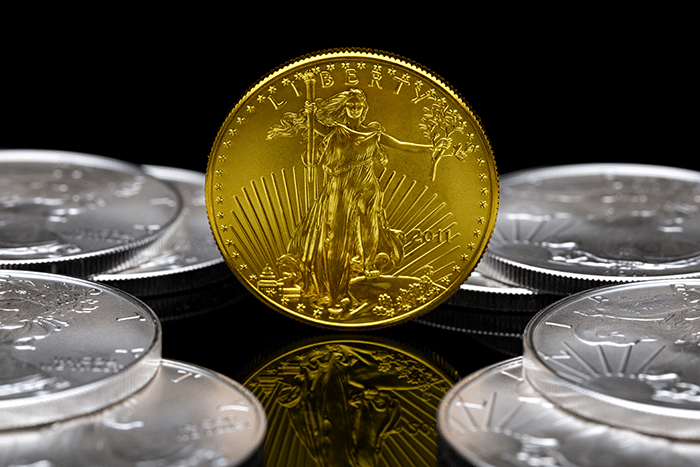 Regardless, collecting American Gold Eagles is an attractive endeavor for many numismatists. The extremely popular Saint-Gaudens design alone is a major reason for many collectors to purchase them. These coins are obviously a great bullion play, with many available for a relatively small premium over melt value. American Gold Eagles were also struck in much smaller numbers than the American Silver Eagles and are legitimately rare coins, especially in superb condition.

There are several ways to collect this series, some of which fit the budgets of most collectors or investors.

For beginners, I would suggest assembling a complete set of 1/10-ounce coins from 1986 to date in grades of MS 69 and PF 69. The complete set contains 79 coins, many of which can be purchased for less than $225 to $300 each. After this has been accomplished, a collector may then choose to move on to the higher denominations as budgets allow. Gold bullion prices have been somewhat depressed recently despite record inflation, so now could be a great time to purchase bullion-related coins. A complete set of any denomination is quite impressive and will give collectors a feel for the difficulty of the task.

Another popular way to collect the series is to purchase a complete set of PF 69 American Gold Eagles. The set contains about 150 different issues, each of which is stunningly attractive. As many know, collecting vintage 1858-1915 Proof American gold coinage is nearly impossible. Only a handful of legendary numismatists have ever come close completing a set, including such famous names as Trompeter, Bass, and Eliasberg. Completing a set of Proof Gold Eagles is expensive for the average collector but is at least doable with the proper funding.

The same set can be attempted in Mint State. Many of the Mint State issues are actually quite scarce in MS 69, so finding these will be a challenge for even the most aggressive collector. Several of these have low mintages, with some below 25,000 coins. One of the key dates for the series in Mint State is the 1991 $25 1/2-ounce Gold Eagle, which has a mintage of around 24,100. The coin is listed on the NGC Price Guide for $5,950 in MS 69. There are several other examples, but they were not carefully handled when issued, so choice coins are quite scarce. Again, the set is possible to assemble for anyone with patience and enough money.

The ultimate challenge for this series is to collect them in MS 70 and PF 70. A complete collection of the entire series in these grades is monumentally difficult. Regardless of your financial resources, it will take many years to accomplish. I would estimate that a complete set of American Gold Eagles in MS 70 and PF 70 would be valued at over $500,000. For collectors of more modest means, I would suggest concentrating on the coins in PF 70. A set of the 1/10-ounce coins can be purchased for around $15,000. These and the other denominations are popular with set registry collectors.

The real challenge for the series is collecting the coins in MS 70. American Gold Eagles struck from 1986 to around 2000 are full of serious condition rarities. The 1989 and 1994 $50 1-ounce coins both have NGC populations of only about 100.

These coins were not carefully saved, and even today, very few are added to the population reports on a regular basis. When an early roll of the coins shows up on the marketplace, most of the coins have considerable marks that preclude them from grading MS 70.

Collecting American Gold Eagles in MS 70 is extremely difficult for several reasons. Many of the coins are very rare and finding them is next to impossible. Most of the coins that have been graded at this level are in closely held collections. I could locate a dozen superb 1907 High Reliefs at a single coin show but would not see a single rare issue American Gold Eagle in MS 70. These coins also very rarely show up at auction. I have not seen a single set of MS 70 American Gold Eagles cross the auction blocks — ever! This is pretty amazing, considering the billions of dollars that have been sold by rare coin auction houses over the last few years.

For someone with adequate funds, who likes an incredible challenge, collecting American Gold Eagles will be a fun and rewarding experience. I suggest working with someone familiar with the series to assist your collecting. Many know the players involved and will be a great help finding coins to fill your set. Whether you start with a modest set of the 1/10-ounce coins or go for the ultimate challenge, you are sure to enjoy the journey.